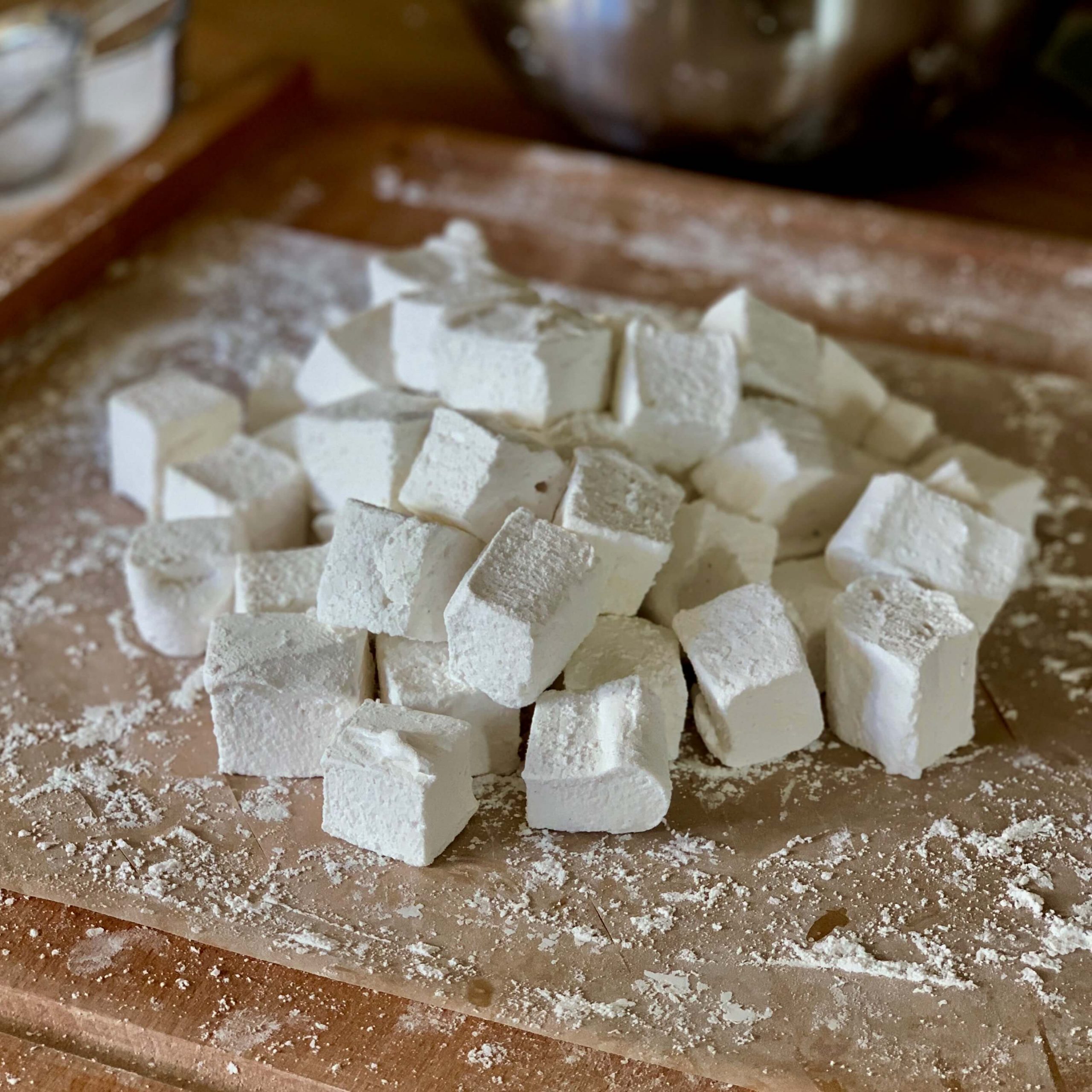 Homemade marshmallows are easier to make than you probably think and they are SO much better than store bought! They’re also gluten free, so they’re a great treat for friends and family who have a gluten intolerance or Celiac disease. I like to use vanilla bean paste instead of vanilla extract in this recipe so that you can see the vanilla bean flecks in the marshmallows.

Stand mixer with whisk attachment (If you’re in the market for a stand mixer this is the 6qt. Kitchenaid one I have and it is amazing! I think it might actually be indestructible)
Small saucepan
Candy thermometer (I have this Taylor one and I love it!)
9X13 pan
Small bowl
Spatula
Small mesh sieve for dusting the pan and the marshmallows

Put ½ cup of cold water in the bowl of your stand mixer, along with the gelatin.

Combine the corn syrup, granulated sugar and the other ½ cup of water in a small saucepan. Over medium heat, cook the mixture until it reaches 240°F (about 7-8 minutes). Once the mixture reaches 240°F, immediately remove from heat and turn on the stand mixer to low speed with the whisk attachment.

With the mixer on slow speed, slowly pour the hot mixture down the side of the bowl into the gelatin, and then turn the mixer to high speed. Whip the mixture for approximately 12-15 minutes. Add in the vanilla bean paste during the last minute of mixing.

Then, dust the top with more of the powdered sugar mixture. Reserve the rest of the mixture for later – you will need it after you cut the marshmallows.

Let the marshmallows sit uncovered for at least 4 hours (I usually leave them overnight). It’s important to leave them uncovered because they are still warm at this point and you don’t want condensation accumulating on top because you will have a giant sticky mess!

Use a pizza wheel to cut it into strips. It helps to spay some oil onto a paper towel and then rub it onto the pizza wheel to prevent it from sticking.

Next, use your pizza wheel or a knife to cut each strip into cubes.

Dust the sides of the marshmallows with the remaining powdered sugar mixture (you might need to make more depending on how much you’ve used so far).

Lastly, enjoy! Store your vanilla bean marshmallows in an airtight container at room temperature up to three weeks.

Happy Thursday! It may be snowing quite a bit here

Well, hello! There are a few new faces since the l

Brought some of the outdoors inside today 🌿 I j