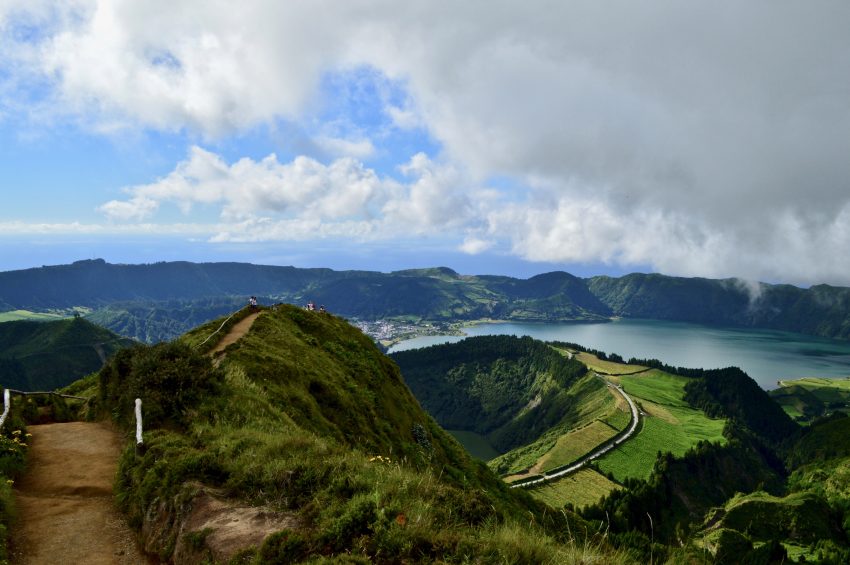 I decided that in celebration of Earth Day earlier this week, it seems only fitting to share a post about my favorite place on earth – São Miguel Island. It is by far the most breathtaking, magical place I’ve ever been. Every square inch of the island is unimaginably beautiful. And oh my goodness, the hydrangeas! They are everywhere – lining the streets, in the fields, along the sidewalks. You can’t go more than 5 minutes without seeing giant hydrangeas. We visited a lot of different places while we were there, but I’ve compiled a list of my very favorites – the top 10 things to do in São Miguel.

Dave and I traveled to São Miguel during the summer of 2018. We first heard of the Azores a few months before our trip, and after seeing only a few pictures I instantly fell in love. Over the next few months, we spent time dreaming of all the places we wanted to see on the island, and came up with a plan of what we wanted to do. We pretty much checked off all the items on our wish list, with the exception of a couple of short hikes that we ran out of time for.

About The Azores Islands

The Azores are an archipelago made up of nine volcanic islands off the coast of Portugal. São Miguel is the largest of the Azores islands, at around 290 square miles. Historically, the Azores haven’t been a very popular destination (at least for North Americans). One of the main reasons for this is that until 2015, the only flights available operated through Azores Airlines, a private airline. They made the decision to open the airspace to other private airlines in 2015. Now, many airlines offer flights and in general the prices have decreased. The island is still relatively uncommercialized, and tourism hasn’t been a huge part of the economy until recent years. São Miguel is still pretty untouched and wild compared to a lot of the other places I’ve been, and I think this is one of the things that makes it so magical!

So, without further ado, here’s my list of the top 10 things to do in São Miguel.

Top 10 Things to Do in São Miguel

1. Take in the View From the Top of Castelo Branco

In Portuguese, Castelo Branco means “White Castle.” I think that Castelo Branco in Vila Franco do Campo is one of the most underrated attractions on São Miguel. It is more of a tower than an actual castle, and it was actually a lookout tower to watch for approaching pirates in order to alert the nearby villagers. The view from the top of the castle is amazing!

Ananases A Arruda Pineapple Plantation is also a must-see on the island! In addition to the tiny (and so instagrammable) pineapple greenhouses, the grounds also are home to a cute cafe and gift shop. The cafe serves various foods and beverages made with fresh pineapples.

4. Hike to Salto do Cabrito Waterfall

This is more of a walk than an actual hike, but the waterfall is absolutely beautiful. Here is the link for the AllTrails guide that we followed in order to find it, although the trail is pretty well marked. You can even swim in the water at the bottom of the waterfall!

5. Walk the Paths and Swim in the Thermal Pools at Terra Nostra Garden

The Terra Nostra Gardens are so beautiful! I wasn’t expecting to enjoy the gardens as much as I did. I thought they would be overrated since it is such popular place to visit, but I was definitely wrong! It’s absolutely worth a visit while you’re on the island.

6. Swim in the Thermal Springs at Termas da Ferraria

At Termas da Ferraria, thermal water heated by an underwater volcanic fissure mixes with water from the Atlantic ocean creating a pleasant thermal pool. The temperature of the pool changes based on the level of the tide. When the tide is low, the water becomes much hotter. When the tide is high, you may not even be able to feel the thermal water at all. It’s also a beautiful place to walk around and enjoy the views from the rocky shore.

“Vista do Rei” translates to View of the King in English, which is not an exaggeration! When it’s bright and sunny, the two halves of the lake (Lagoa das Sete Cidades) actually appear to be two different colors. According to local lore, there was a shepherd and a princess who fell in love, but were forbidden from seeing one another. The lakes were formed by their tears – the princesses’s green eyes formed green half of the lake, and the shepherd’s blue eyes formed the blue half of the lake. The abandoned Monte Palace Hotel sits just beside the official “miradouro” (or viewpoint) of the Vista do Rei. This previously five-star hotel was abandoned in the early 1990s after being open for only a couple of years. You can go all the way up onto the roof of the hotel, and the view is absolutely unforgettable.

Chá Gorreana is actually the only tea plantation in all of Europe, and they have been cultivating tea since 1883. It is a family-run business that has been passed down through five different generations. Here at Chá Gorreana, you can walk through their tea processing/packaging factory, and watch the process first-hand. You can also wander through the beautiful tea fields as well.

The Miradouro da Grota do Inferno is one of the most iconic viewpoints on the entire island, and it’s easy to see why! Pictures from this viewpoint are what made me fall in love with this island before I ever stepped foot on it.

10. Watch the Sunset from Mosteiros Beach

If I could choose to relive one evening of my life over and over again, it would be the evening that we spent on Mosteiros beach watching the sunset. As the sun was setting to our right over the Atlantic Ocean, there was a small soccer game happening on the black sand beach to our left. It was so magical, and whenever I think of the trip we took to São Miguel, this is the place that I go back to in my mind. Sitting on the black sand beach, we watched the sun set behind the rock formations out in the ocean, their shadows growing longer as the sun sank closer towards the horizon.

My little office corner! It is usually never this

Almost too pretty to eat! This has been a years-lo

I love the fitfull gusts that shakes  The caseme

If only the kitchen could stay this clean & organi

Earth and sky, woods and fields, lakes and rivers,

Nature is our greatest teacher, of surrender, of a

I don’t even mind doing dishes in this beautiful