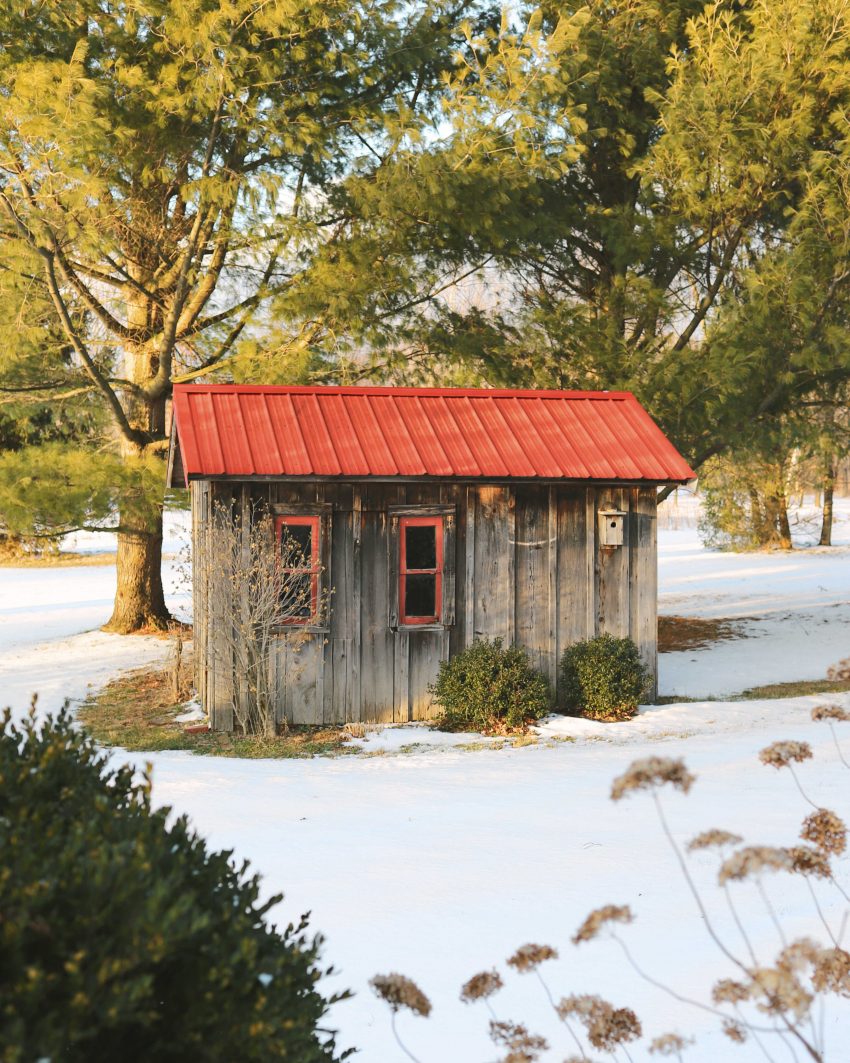 It’s a bit overdue, but I’d love to take you on a tour of our chicken coop! I’ve had a years-long dream to have chickens, and we were finally able to get them last spring. We ordered from Meyer Hatchery – an assortment of Dominiques, Easter Eggers, and Blue Orpingtons. We received them around the end of April, and they started laying around September/October last year. I don’t think it will ever get old going out to collect the eggs from our chicken coop!

We converted an old shed on our property into a coop with an attached run. My husband Dave and his dad both had some time off work the winter before we got the chickens, and they built out the inside of the shed. It was quite the process, as nothing in the shed was even close to being square or level. Our farmhouse (that we bought from my grandma a couple of years ago) was built in 1832, and I’m not sure exactly how old the shed is, but as you can see from the “before” pictures it’s pretty old and absolutely charming!

While Dave and his dad were working inside the shed, they actually found some square nails that had been used. From what I found, square nails were made from around 1700-1830. They were commonly used in construction up until around 1880. So neat!

I added a shutter to the window where the chickens enter and exit the coop, made from salvaged materials that I found around our property. The boards I used belonged to a dog house for my great-grandpa’s dog Cleo from their family farm. I never got to meet my great-grandpa, but I love that a little piece of family history found its way to us and was able to be given a new purpose.

Inside the coop, the actual area for the chickens is around 8’x8’. There is also a storage area just inside the door that’s around 3’x8’. The storage area has been amazing for keeping extra feed, pine shavings, mealworms, and other supplies that we need to access often. We added four nesting boxes with a back that flips down. I love that you can get the eggs from the nesting boxes without going into the coop area.

I built four wall-mounted PVC feeders (using this Sugar Maple Farmhouse tutorial), which have been so handy! We only have to fill them every week or week and a half. I’ve been so happy with how they turned out, and would definitely recommend it! I fill the PVC pipes with a canning funnel and a big feed scoop – it works great!

For the floors, the original boards were pretty warped and uneven, so Dave installed two 4’x8’ sheets of ¾” plywood. On top of the plywood, I added peel-n-stick vinyl floor tiles to keep the floor relatively easy to clean. I can’t find a link for the exact tiles I used, but here’s another great option.

I built the run later on in the spring after the snow melted. It’s 12’x16’ and 6′ high, with pressure-treated lumber on the bottom (where the frame meets the ground), and cedar for everything else. The coop and run are visible from our patio and our main entrance into the house, so I wanted to make sure it was pretty to look at! I attached 1” black PVC-coated welded wire mesh from Fencer Wire on the sides. For the top, I used chicken wire to keep the girls safe from airborne predators.

As you can tell in these photos, one side of the shed is significantly higher than the other. The frame for the run is 6′ tall on the side where the coop door is. On the other side, I had to shorten it by about 3 inches (it’s only around 5’9″) to make it fit beneath the roof overhang. You’ve gotta work with what you’ve got I guess haha!

After these photos were taken, I did also add ramps from the window into and out of the coop.

Here is a link again for these beautiful iron H-L Hinges (the same ones I used for the shutter).

I recently added these solar-powered motion lights to the run as an extra safety precaution to scare nocturnal predators away. We haven’t had any issues thus far, but I’m not taking any chances. We also used these swivel-locking carabiners for the hasps on the interior and exterior doors of the coop and run. The swivel part of the carabiner is supposed to make it raccoon-proof.

For the new cedar boards that I used for the run, I ended up finding a treatment to make them look aged. I wanted them to blend in better with the silvery, weathered cedar siding on the shed. It’s called Eco Wood Treatment, which is “a nontoxic wood stain, treatment, and turns all wood a high end aged look, with just one application, no need to ever restain, no maintenance needed.”

The product comes packaged as a powder that you mix with water. The minerals in the product react with the wood to create a kind of aged look, while also helping to protect and preserve the wood. When you first apply the treatment the wood doesn’t look any different. Over a few days and weeks, the wood gradually changes to create an aged look. I have been so happy with how it turned out and would definitely recommend it!

The first photo below is shortly after the Eco Wood treatment, and the second photo is a day or two later.

We also used Eco Wood Treatment on some of our unfinished pine supers for our beehives and it’s holding up great. Plus it’s about 500x faster than painting! You can put the treatment in a large, shallow container and dip the pieces instead of painting. I 10/10 recommend it!