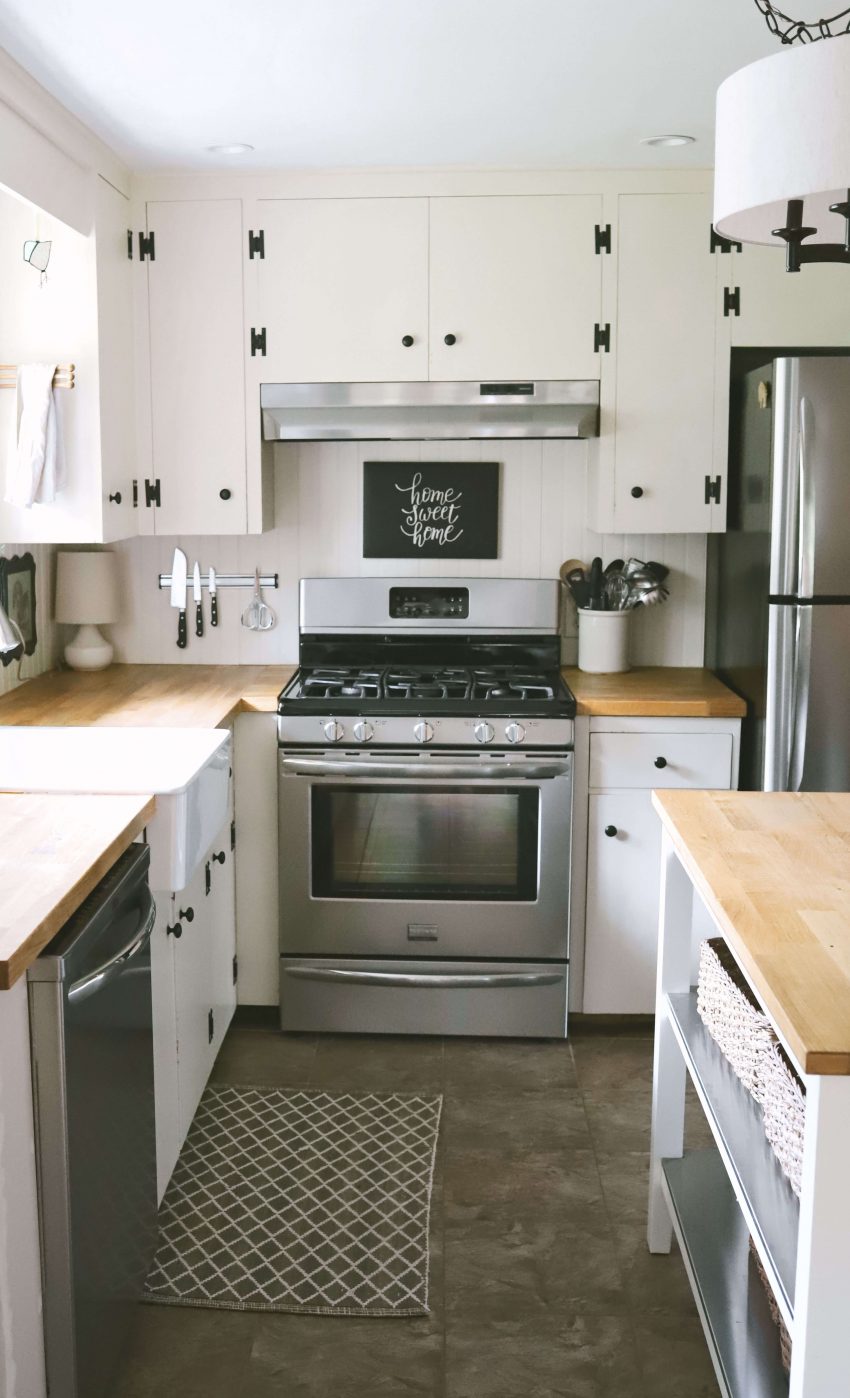 As promised, here is a tour of our little 1200 sq. ft. ranch house. Dave bought this house 10 years ago before we were married, and as you can see from the “before” pictures it’s really come a long way. Most of our improvements were DIY, with the exception of some major things we weren’t able to do ourselves – like installing new windows. We also had to enlist some help with the kitchen in order to reconfigure the cabinets to accommodate a dishwasher and range.

I regret that I don’t have a lot of great before pictures. If you are in the “before” or “during” phase, my advice to you is to take those pictures! When you don’t love (or even like) the way things are with your house, it’s not really fun to take pictures. But I wish we had more pictures to look back on and see how far we’ve come! I honestly had a terrible attitude and at times I hated our house during the before stage. What I lost sight of is that it’s not the house that matters, but the people (and pets!) that live inside of it. Yes, it’s fun to fix it up and make your house your own, but don’t lose sight of the more important things in life! <3

If you are in the process of fixing up your house, know that you can DIY a lot more than you probably think you can. You can do it! Between Pinterest and Youtube and Google, you can figure out how to do almost anything. One project I’ve done that I never thought I’d be able to do myself is tiling the bathroom backsplash! I have included links to some of the DIY tutorials I followed for some of my projects.

The kitchen was one of the first DIY projects I tackled at this house, and let me tell you what a difference it made! There’s almost nothing a fresh coat of paint can’t fix (like these terrible knotty pine cabinets). The cabinets were structurally in great shape and we weren’t ready to shell out a small fortune for new cabinets, so I painted them using the Rustoleum Cabinet Transformations Kit in Linen (without the glaze included in the kit). We also installed oak butcher block countertops and a farmhouse-style sink from Ikea, along with a beadboard backsplash.

We don’t have a mudroom in our house, and the main entrance that we use opens right into the kitchen. Another one of my DIY projects included this wall with beadboard that matches the kitchen backsplash. I topped it with trim and installed these coat hooks from Amazon. It is so functional and makes the kitchen so much more organized!

We originally were hoping to knock down the walls that separate the kitchen, dining room and living room in order to make the house feel more open. After much debate (and realizing that would cost WAY more than we wanted to spend), we opted to have these wall cut-outs instead. As you can see, there is way more light flowing through the house now. We got a similar effect for a much smaller investment.

The picture ledge above the sofa was another DIY project. I use pine boards and followed this tutorial from Chris Loves Julia. I finished mine with this Danish Oil in Dark Walnut. I used my magnetic stud finder to find the studs and screwed the ledge directly into the studs using 3″ wood screws.

Painting the knotty pine paneling in the living room really brightened up the space and made it feel WAY bigger. 10 out of 10 recommend! If you are painting knotty pine, it’s important to use a strong primer. I always use this BIN Oil-Based Primer. It works really well and I haven’t had any of the knots bleed through at all. I did two coats on just the knots and one coat on the entire wall. I wish I had used this primer on the kitchen cabinets, because there are a couple of spots where the knots are starting to bleed through. I mostly followed this tutorial from Young House Love on “How to Paint Wood Paneling.”

The fireplace and the insert are still a bit of an eye sore and it was next on my DIY list but now that we’re moving, it will stay there for the next person to worry about haha! I was planning to remove the insert, install a chunky natural wood mantle, paint the stones, and re-tile the hearth.

The bathroom was a huge transformation! I painted the cabinets and installed new hardware, and we installed a maple butcher block counter from Ikea.

I used mini subway titles and followed this tutorial from Jenna Sue Design to tile the backsplash. I love how it turned out! I do wish I had gone with a darker grout instead of the white grout that I chose, but you live and learn I guess.

You can see a before picture of the office on this post.

The built-ins in the master bedroom were another DIY and made our tiny closet so much more functional! Our spare bedroom below is super tiny, so it’s hard to get a good picture of it.

And that’s it! The house sure has come a long way, and I’m really going to miss it when we move. What are your favorite DIY projects you’ve done? What’s the next one you want to tackle?? Leave a comment below!