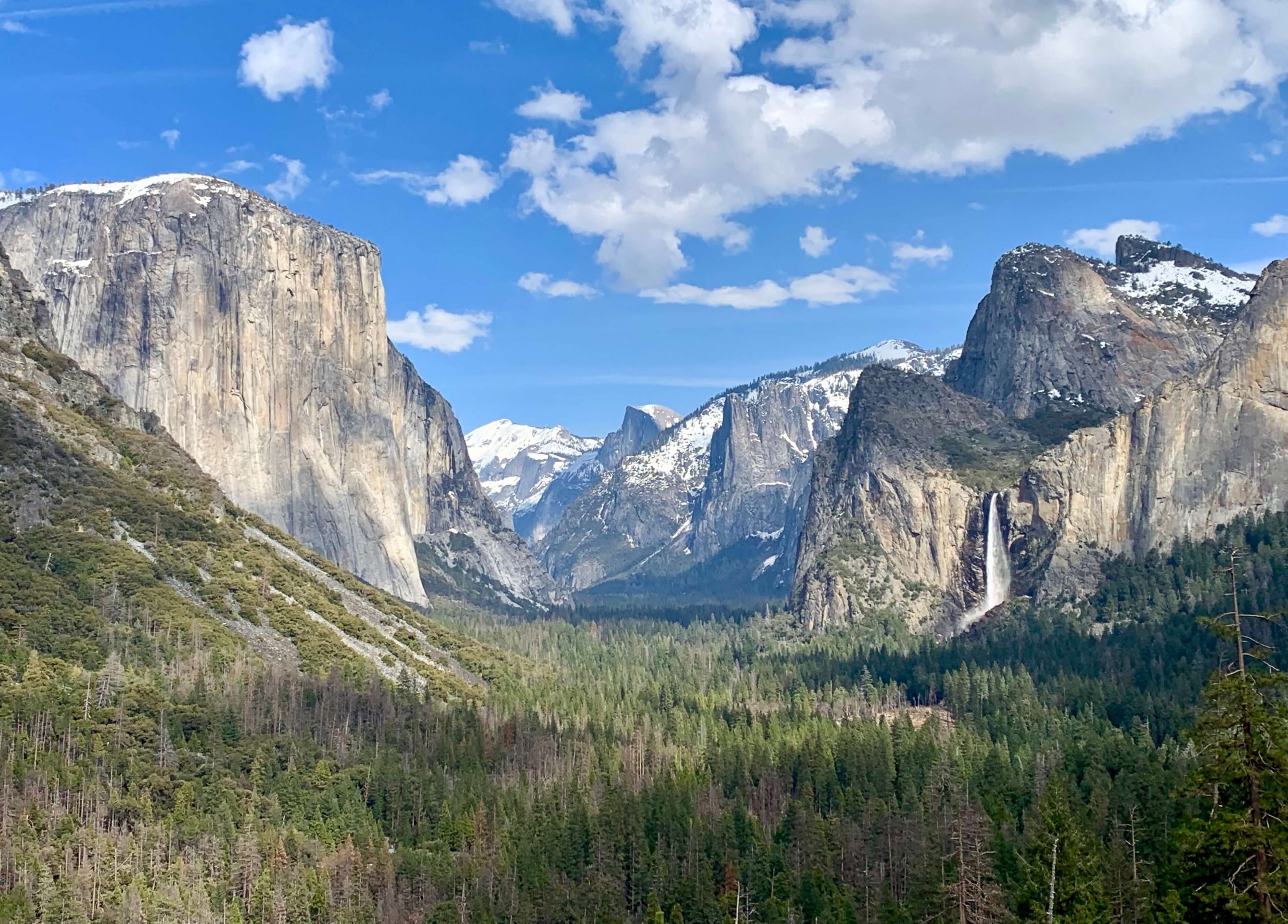 “The Incomparable Yosemite. The walls are made up of rocks, mountains in size, partly separated from each other by side canyons, and they are so sheer in front, and so completely and harmoniously arranged on a level floor, that the Valley, comprehensively seen, looks like an immense hall or temple lighted from above.”

“But no temple made with hands can compare with Yosemite. Every rock in its walls seems to glow with life. Some lean back in majestic repose; others, absolutely sheer or nearly so for thousands of feet, advance beyond their companions in thoughtful attitudes, giving welcome to storms and calms alike, seemingly aware, yet heedless, of everything going on about them.”

“Awful in stern, immovable majesty, how softly these rocks are adorned, and how fine and reassuring the company they keep: their feet among beautiful groves and meadows, their brows in the sky, a thousand flowers leaning confidingly against their feet, bathed in floods of water, floods of light…”

“Entering the Valley, gazing overwhelmed with the multitude of grand objects about us, perhaps the first to fix our attention will be the Bridal Veil, a beautiful waterfall on our right. Its brow, where it first leaps free from the cliff, is about 900 feet above us; and as it sways and sings in the wind, clad in gauzy, sun-sifted spray, half falling, half floating, it seems infinitely gentle and fine; but the hymns it sings tell the solemn fateful power hidden beneath its soft clothing.”

“Just beyond this glorious flood the El Capitan Rock, regarded by many as the most sublime feature of the Valley, is seen through the pine groves, standing forward beyond the general line of the wall in most impressing grandeur, a type of permanence. It is 3300 feet high, a plain, severely simple, glacier-sculpted face of granite…”

“Sauntering up the Valley through meadow and grove, in the company of these majestic rocks, which seem to follow us as we advance, gazing, admiring, looking for new wonders ahead where all about us is so wonderful, the thunder of the Yosemite Fall is heard.”

“Through this shining way Yosemite Creek goes to its fate, swaying and swirling with easy, graceful gestures and singing the last of its mountain songs before it reaches the dizzy edge of Yosemite to fall 2600 feet into another world, where climate, vegetation, inhabitants, are all different… The Yosemite Fall is separated into an upper and lower fall with a series of falls and cascades between them, but when viewed in front from the bottom of the Valley, they all appear as one.”

“Things frail and fleeting and types of endurance meeting here and blending in countless forms, as if into this one mountain mansion Nature had gathered her choicest treasures, to draw her lovers into close and confiding communion with her.”

“Here indeed is tree-lover’s paradise; the woods, dry and wholesome, letting in the light in shimmering masses of half sunshine, half shade; the night air as well as the day air indescribably spicy and exhilirating; plushy fir-boughs for campers’ beds, and cascades to sing us to sleep.”

3 thoughts on “Excerpts from John Muir’s “The Yosemite””