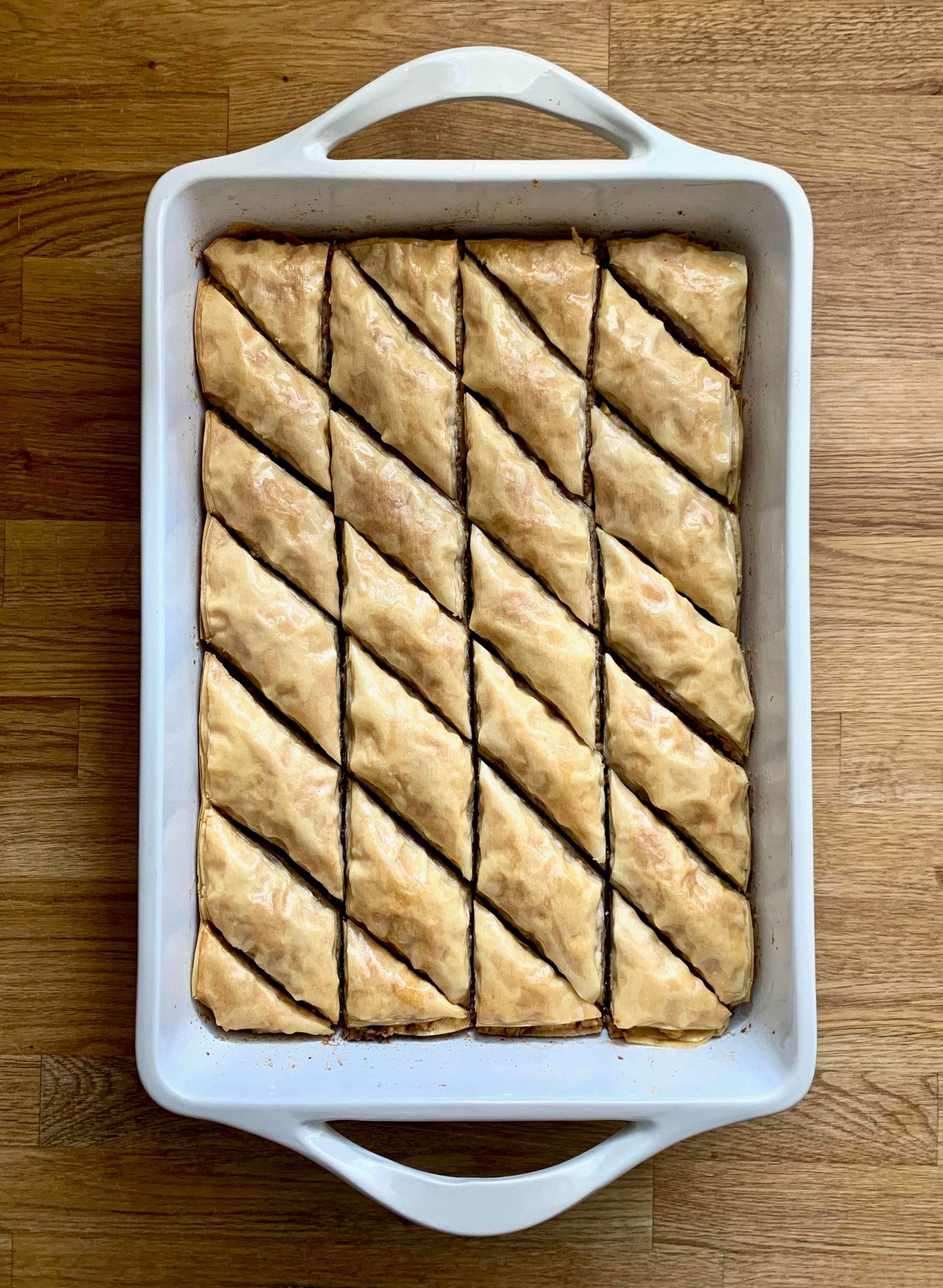 Baklava. Yum. Just saying the word “baklava” makes my mouth start to water! This buttery, flaky, sweet dessert is amazingly delicious and easy to make. It is so much better than any store bought version you won’t even believe your taste buds! I was recently asked to make baklava for a bridal shower for my cousin’s sweet bride-to-be and of course I happily obliged! 🙂

This recipe makes enough to cover a 9×13 pan. You can cut the pieces to whatever size you want depending on how many pieces you need. I recently doubled this recipe to fill an entire half-sheet pan (more or less successfully lol) for my cousin Anna’s beautiful wedding in the fall.

Let’s just pause for one second to admire the cake that my aunt Gwen made for her daughter’s wedding. Have you ever seen a more stunning cake?!

Well, let’s pry our eyes off that gorgeous cake and get back on track…

If you decide to double the baklava recipe and use a half sheet, I would recommend using less layers than the single recipe calls for. I would only do two to three layers of walnuts instead of four. Using less layers will keep the top of the baklava about even with the top of your half sheet pan. When I made the double recipe it was quite a bit taller than the rim of my baking sheet. Then, when I cut the pieces into one-inch squares and they ended up being a little bit too tall and some of the pieces started tipping over. While this did not dissuade any wedding guests (or me) from eating the bakalva, it wasn’t the most aesthetically pleasing.

Thaw phyllo dough (overnight in fridge works great). Allow to sit covered at room temperature for 30 minutes to an hour before using. I like to place the unrolled stack of phyllo sheets on a half sheet pan and cover completely with a damp dish towel. Be sure to cover the phyllo or it will get dried out and crumble when you try to lift it.

The sheets I bought were 9×14 so I did trim the end so that the length fit my dish. I also trimmed a tiny triangle off each corner because my pan has rounded corners.

Melt the butter in a small saucepan, then butter the bottom and sides of your 9×13 pan.

Make honey sauce by combining the following ingrediends in a saucepan: sugar, lemon juice, honey, water. Bring to a boil over medium to high heat and stir until sugar is dissolved. Next, reduce heat to medium/low and cook for an additional 4 minutes without stirring. Remove from heat and allow to cool while completing the rest of the process for the bakalva.

Finely chop walnuts. I put the walnuts in my blender and pulse about 5-10 times to achieve the desired consistency. Then, mix the cinnamon into the walnuts

Layer the ingredients into the pan

Layer the phyllo sheets into the pan one at a time, with butter brushed on top of each sheet. Add in the walnut mixture according to the directions below. The process of brushing the butter on top of each layer is a little bit tedious, but definitely worth the end result. It is what gives the phyllo the flaky texture after baking. Be sure to cover the stack of phyllo sheets after each use so that the sheets don’t get dried out.

Butter the topmost layer of phyllo, then cut as desired

Traditional baklava has a diagonal shape, but I’ve cut it into squares as well when I needed smaller pieces. Be sure to cut all the way through to the bottom of the pan. If not, you will have a difficult time trying to remove the finished pieces.

After cutting the baklava, bake at 325°F for 1 hour and 15 minutes or until tops are golden brown. Usually I end up baking for 1:20 to 1:25 to get a darker golden brown color on top.